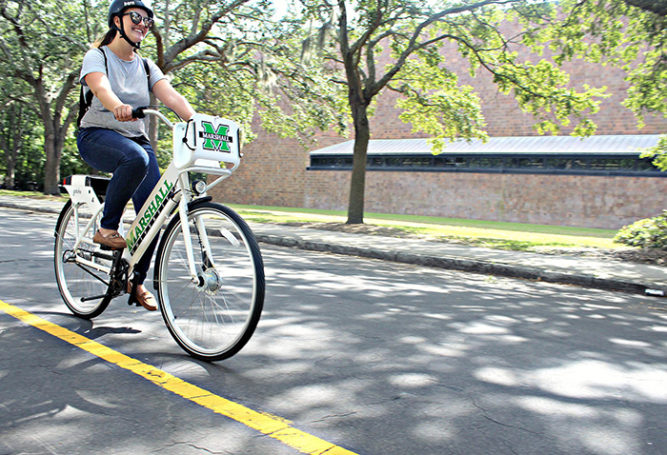 That’s a perfect way to describe the phenomenon we witnessed last year when about 35% of our visitors rode bikes on Transportation Alternative’s Free Bike Fridays (the overall percentage of visitors on bikes was a not-so-shabby 20% ).

Not only does the Island’s size, flatness, and car-free roads make bicycling an ideal way to get around, but there’s also just something about biking here that appeals to people of all ages and origins.

They ride more slowly, they ride two and three abreast while chatting. The bike in sandals and sundresses instead of sneakers and spandex. They stop to play minigolf.

West 8 saw this opportunity during our initial design competition and proposed a large fleet of custom-designed, iconic wooden bicycles for visitors to ride for free.

But what does it mean to create a “car-free bike oasis” out here? Throughout this year, West 8 and GIPEC have been trying to answer that question.

It’s more than just free bicycles. It’s even about more than just the widths of the paths. The challenge is to understand the differences between how people would experience this new park on a bicycle versus on foot.

Fortunately and not coincidentally, West 8 has thought a lot about this, and is very familiar with parks that see bicycle use similar to Governors Island. Their work on the Kröller Müller Museum Sculpture Garden , situated in a national park in the Netherlands with a 20-year old free “white bike” program, taught them valuable lessons about how people behave with free bikes.

For example, West 8 is locating the racks of free bicycles at the arrival plazas in places that would be most intuitive for families rushing to catch the ferry to drop them off.

The more conveniently located the return racks are, the fewer staff are needed to pick up stray bicycles.

We’d love to hear what a “car-free bike oasis” means to you. We got great feedback and questions about the bicycle program during our update meeting with the GIA and the GIAC.

What would you want to see there? What could you do here that you can’t do elsewhere in New York?

Governors Island, in the heart of New York Harbor, is only 800 yards from Lower Manhattan, and even closer to Brooklyn.

Come Join Us on: