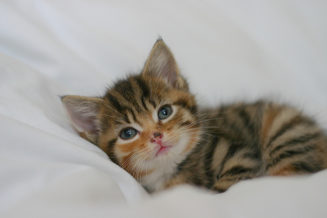 We have received many calls and emails about the cat that found her way to Governors Island over the weekend.

The cat is doing great and is making herself at home around the office and the Island.

We realize that this cat needs a name!

We remembered that one of the most popular areas of the Island, Picnic Point, was named by one of our blog readers, so we are again turning to all of you for your ideas.

Give us your suggestions for her name!

Fred Van Lente, author of The Amazing Spiderman, will be on Governors Island this Sunday at 1:30 PM to talk to visitors about how he set two issues of the iconic series on the Island.

In each story, Spiderman battles the Sandman around some of the island’s most notable landmarks and areas, including Castle Williams, Fort Jay, the historic district, and even the Brooklyn Battery Tunnel vent shaft (which is how the evil Sandman accesses Governors Island).

Even the old  Burger King on the southern end of the Island makes an appearance in the story.

Van Lente will take your questions about Spidey, how comics are made, and anything you might want to ask, so be sure to stop by the Commanding Officers House on Sunday to hear about Spiderman’s adventures on the Island. 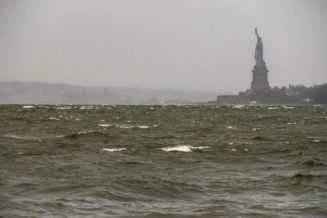 We have received so many well wishes and questions from everyone about how Governors Island fared during the storm that we wanted to post a quick update.

Our preliminary inspection of the Island shows that the Historic District, including all landmarked buildings and the Governors Island National Monument, as well as the park construction site, do not appear to have suffered any lasting damage from the storm.

That said, the Island has lost a small handful of trees and there is considerable debris around the Island, including tree branches and other material that washed ashore during the storm.

There is also some fencing that needs to be repaired.

Currently, the Island is not open for operations because it does not yet have power.

The Trust for Governors Island team, together with Turner construction and HMS Global (which runs the Island’s ferry), are working together on the Island’s clean up.

We are also working with all appropriate agencies to return the Island to full operations and to resume construction as quickly and safely as possible. 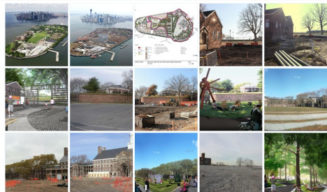 We know you can’t see us out here in the middle of the Harbor in the winter, but we don’t want you to miss out on all the action.

So we’ve added two fun new ways to peer over our construction fences. We’re snapping shots on Instagram, so follow us at governors island (if you didn’t just delete your account this week).

And we’ve started a neat slideshow on dropbox that shows construction progress in a series of before and after shots with renderings. It changes every week, so be sure to keep checking in. 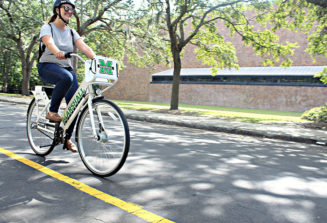 That’s a perfect way to describe the phenomenon we witnessed last year when about 35% of our visitors rode bikes on Transportation Alternative’s Free Bike Fridays (the overall percentage of visitors on bikes was a not-so-shabby 20% ).

Not only does the Island’s size, flatness, and car-free roads make bicycling an ideal way to get around, but there’s also just something about biking here that appeals to people of all ages and origins.

They ride more slowly, they ride two and three abreast while chatting. The bike in sandals and sundresses instead of sneakers and spandex. They stop to play minigolf.

West 8 saw this opportunity during our initial design competition and proposed a large fleet of custom-designed, iconic wooden bicycles for visitors to ride for free.

But what does it mean to create a “car-free bike oasis” out here? Throughout this year, West 8 and GIPEC have been trying to answer that question.

It’s more than just free bicycles. It’s even about more than just the widths of the paths. The challenge is to understand the differences between how people would experience this new park on a bicycle versus on foot.

Fortunately and not coincidentally, West 8 has thought a lot about this, and is very familiar with parks that see bicycle use similar to Governors Island. Their work on the Kröller Müller Museum Sculpture Garden , situated in a national park in the Netherlands with a 20-year old free “white bike” program, taught them valuable lessons about how people behave with free bikes.

For example, West 8 is locating the racks of free bicycles at the arrival plazas in places that would be most intuitive for families rushing to catch the ferry to drop them off.

The more conveniently located the return racks are, the fewer staff are needed to pick up stray bicycles.

We’d love to hear what a “car-free bike oasis” means to you. We got great feedback and questions about the bicycle program during our update meeting with the GIA and the GIAC.

What would you want to see there? What could you do here that you can’t do elsewhere in New York? 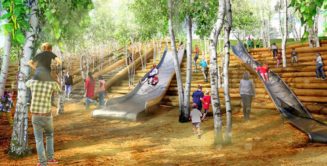 Picture yourself in a new park on Governors Island. What you would do there?

What would you see?

What if you were on a new waterfront Great Promenade looking out at the Statue of Liberty? What would it be like?

On a few select weekends this fall, we’ll be inviting visitors to tell us their ideas for our new 40-acre park and Great Promenade and have their picture taken and digitally inserted into thier favorite conceptual vision for that new park.

If you’ve had your photo taken at our photo booth, visit our Flickr page and download your picture!

Check back with us to find out about upcoming photo booth dates or sign up at info-gipec@empire.state.ny.us for updates about Governors Island park planning and other events.

The photo booth is just one of many ways we’ll have for you to get involved with the future park plans. 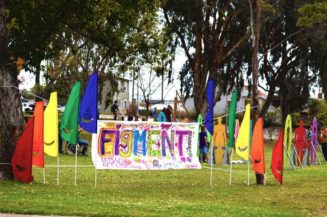 Day One of the Figment Festival was pretty amazing.  Art projects are springing up all over the Island in unexpected places and if you were flying over Governors Island you might have noticed a string of balloons floating above the Parade Ground.

I hope the fantastic red white and the blue electric car is back today and I’m looking forward to the performance of the “puppets” in the Emergence show in Building 14 in Nolan Park. Figment is on today Saturday, June 28th, and tomorrow June 29th rain or shine.

We believe passionately that Governors Island is a place for the arts, for risk, for experimentation, for projects that you can’t do in other public spaces in NYC.

We are thrilled to welcome everyone who has helped make Figment happen and we are awestruck by their creativity, passion, and organization.

Click here for our ferry schedule and directions.  Come experience New York’s Island of the Arts!

If you missed out, next time be sure to mark your calendar for next year, and bring a friend! It’s sure to be a great time with the music, art, games, and more.

Come Join Us on: